Know THIS Before You Buy an LED Bicycle Light

Cycling is great in so many ways. But what about when daylight is challenged? Since you’re on this page, you’re probably in the market for an LED bicycle light to increase your visibility after dark. That’s great…but continue reading because light placement is just as important as the type of light you’re looking for.

Whether you’re an experienced cyclist, or a newbie with visions of peddling thousands of gas-free miles, just remember, motorists deal with many distractions. 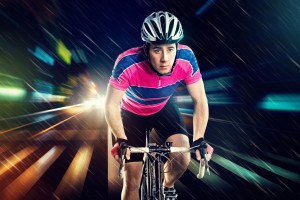 From talking on their phone (even if it’s hands-free) to putting in a DVD for the kids in the back seat…or watching a mini-version of their car in motion, via the GPS…they’ve got a lot going on – in addition to keeping their eyes on the road! Then as the headline says, there are street lights, porch lights, traffic lights, neon signs and the headlights of on-coming cars. Then there’s YOU, on your bike. Now of course you are as important as any of those other elements. Plus, you’re also a MOVING object! Just think about that. And while you’re doing so, think hard about how MUCH you want to be noticed along side all of those glittery, flashing, blinking, multicolored distractions.

Don’t Be a Ninja!

When planning a cycling excursion that’s either after dark, or one that may extend past 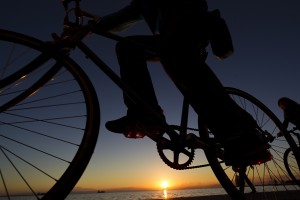 sunset, the one thing you should not envision yourself as, is a ninja on wheels! As darkly inviting as the image might convey, nothing is more dangerous, or irritating to motorists, than someone on a body-powered contraption, after dark, wearing dark clothing, with no illuminating identifiers. If, as in the picture, your rides only take you along deserted stretches of sandy beach’s with only the warm glow of the setting sun to light the way…then kudos to you! But WAKE UP…the daydream is over! This is reality. This is life as we know it. And the next paragraph might just be a wake up call!

As alluded to above, drivers have distractions galore. And unless they can see you, they’ll easily ignore you. This is why when buying an LED bicycle light, there are a number of factors to take into consideration.

Color. Bicycles are more easily seen when more than one color light is used. The two most obvious colors and red and white. 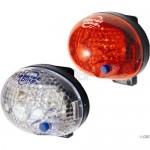 Tail lights. You might already assume that a ‘rear’ light is essential. Therefore a soft red ‘blinking’ light is ideal for that purpose. Some will advise that a solid white light on the back-end is also a good idea.

Headlights. It’ll always be white, and can be of variable lumen output depending on your situation. You might actually want to contact a municipal office in your area to find out if any regulations regarding bicycle lights exist. In the U.S.A., these regulations are often much the same as the DOT laws already in place for that particular state.

Trial and error as well as personal preference often dictate the type of ‘headlight’ your bike will carry. Some riders prefer a wide flood-like beam which helps to illuminate objects off to both sides of the bike. Others say a more narrow type beam, going no farther than thirty feet down the road ahead, is the best type of light. But not too bright! Cyclists using a front light of 200 lumens have reported being ‘high-beamed’ by oncoming motorists. Aiming the light slightly downward toward the road will ensure you’re not blinding on-coming cars. 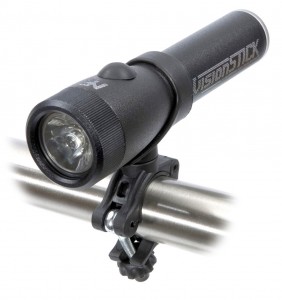 A couple of popular LED flashlights cited by experienced cyclists are the Zebralight SC600 or the Fenix LD20.

If your cycling routes are more city than country, then it’s not so important to illuminate your way. Here, a light with lower lumens will probably suffice. You don’t want to blind other forms of traffic, but simply be clearly recognized for what you are.

For cycling dedicated bicycle trails, it’s advised not to go overboard with the lights. 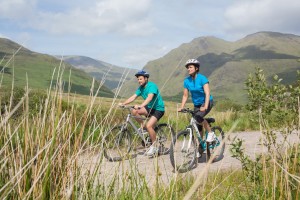 Consider that for an after-sunset ride, it will be pitch dark. Whereas you might assume that this is a prime location to have the brightest headlight possible, it could be potentially hazardous when meeting another cyclist in the opposite direction. When your eyes have adjusted to the darkness, coming in sudden contact with a high-lumen ‘searchlight’ can be very disorienting. Especially when in motion. So for these cases, a medium output light is suggested. There’s also not much need for blinking lights under these conditions either.

Lightsngear is here to help. If you need further clarification on anything discussed in this article, please let it be known in the comments section.

Shopping for an LED bicycle light has never been easier!   Amazon has an impressive selection of all types of lights, in addition to the specific flashlights linked further up in the post. You can’t help but find something appropriate within the listings, and of course at a competitive price!