Eight slot chargers have been introduced by a couple of major manufacturers. This time, XTAR enters the multi-bay arena. This is the XTAR VC8. 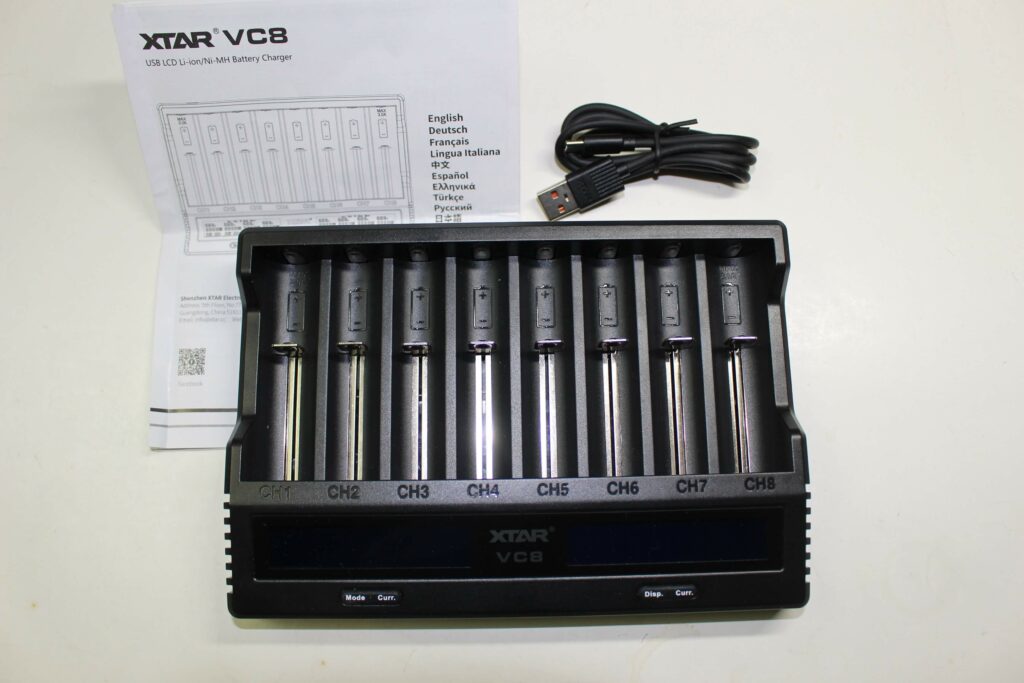 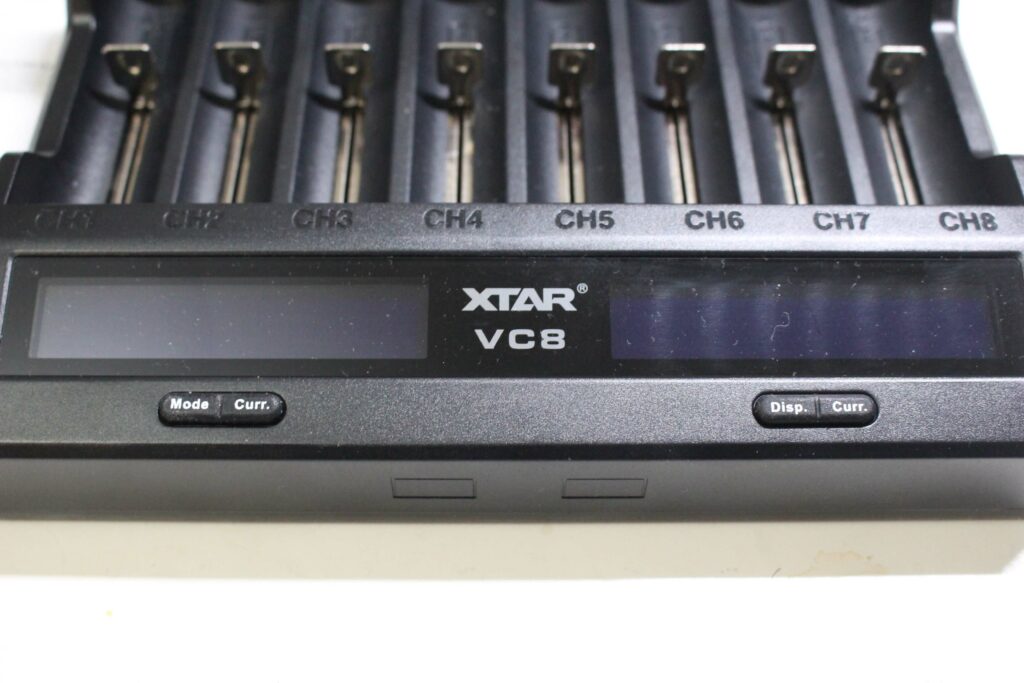 As you can see from the picture the only items in the box are the charger, the manual, and a USB-C power cable.

Features of the XTAR VC8 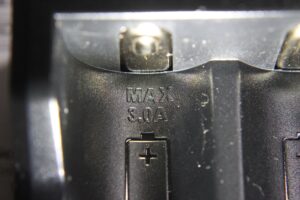 One of TWO 3A slots 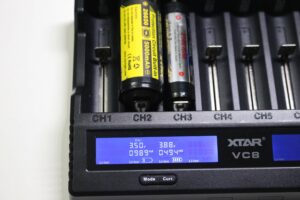 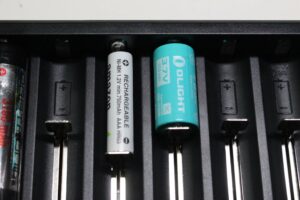 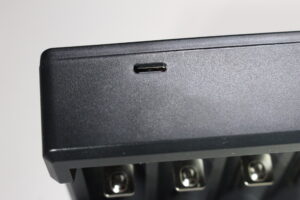 *lesser used sizes in between those listed above will also fit 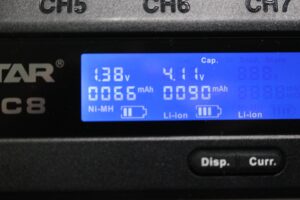 Two battery types in the same section. Accumulated mAh is showing for each battery. 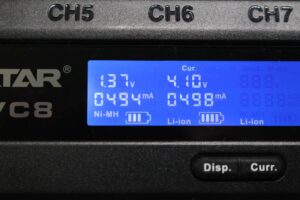 Three across. One has finished. 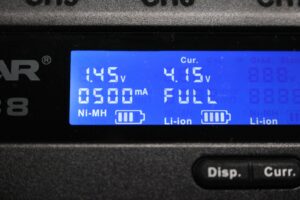 The Li-ion cell has finished

The 8 charging slots are divided into two groups of four. Below each section are two operating buttons. On the left side they’re marked as “mode & current”. On the right, it’s “display & current”.

Connect the USB-C cable to an appropriate power source (the higher the amperage the better). The display will perk up and you’re ready to go. With the insertion of a battery, the display will show battery voltage, battery type, and the amount of “mA” the battery is receiving. If the battery is in one of the bays on the RIGHT side, you can press “disp” (once) to show the amount of “mAh” the battery has received since charging started. Press a second time, and it’ll show the “internal resistance” of the battery. Continuing presses of the button will toggle back and forth between each of the readings.

To change the charge CURRENT (amount of mA) press the “Curr” button. The default mA for large lithium batteries is 2000. For smaller capacity cells such as 16340, and 14500…the default is 500mA. For Ni-MH, it’s also 500. Each press of “Curr” will decrease the mA to the next level down, until it toggles back to the highest amount. Pausing on any level should automatically change the mA to that amount.

As soon as the charge is finished, “FULL” appears in the display. You can then press the button to toggle the end results.

The mA (current) options are as follows;

Note the mA options available per number of batteries being charged;

The instructions in the previous section affect all eight slots. Here I’ll describe what’s different with slots 1-4, and how the “mode” button operates.

In addition to standard charging, you have two other choices. Press “Mode” and you’ll see “grad” (for Grade). This option goes through a charge/discharge/charge cycle to tell you the real capacity of the battery. A second press, selects “store” (for Store). This is meant to be used if you have batteries that you’re not planning to use for awhile. So with “store” it analyses the cell(s) then does a discharge followed by a partial charge. It finds out what the mid-range point of the battery is, then charges til it reaches it. This ultimately is meant to preserve its life, while resting for a prolonged period.

Keep in mind that whatever option you choose, is applied to EVERY battery placed in slots 1-4! If you have four batteries, and ONE needs to be stored, while the rest are to charged… then put the other three in slots 5-7. Make sense?

To Summarize the VC8

The XTAR VC8 is a good charger. From using it for a few days prior to writing this review, I have no specific complaints.

All the battery types I tried fitted in the slots very well…even a 75mm long 21700 cell! For obvious reasons you can’t place TWO 26650 batteries side by side though.

During the first couple of uses, I wondered if the mA selection process was working properly. I wasn’t successful at setting it to 2A when charging a 18650 or 26650 battery. It was later realized that the USB (AC) adapter I was using, wasn’t feeding the unit enough voltage. I switched it to an XTAR 3A (max) adapter, and BINGO! So for the unit to charge at the claimed currents, the more amps you give it, the better.

For some unknown reason, when an Ni-MH battery is inserted, it ‘flashes’ the battery type for several minutes. During this time the mA might seem a bit low. It almost appears as if it’s summing up the battery. I observed the mA increase, when the flashing stopped. It doesn’t do this when a Li-ion is inserted 😕

One truly good thing, is that the unit has the smarts to know which sizes of lithium batteries can be charged at a higher rate, and which ones can’t. In slots 5-7, I placed an IMR 18650, an IMR 18350, and a 14500. The two smaller capacity batteries got special treatment, at just under 500mA 😀  Whereas the 18650 was given TWICE that! This was very good to see 😛 😉 It’s for this reason that I recommend letting the VC8 choose its own current, rather than setting it manually.

I recommend the XTAR VC8 for the majority of your battery charging needs. Amazon Prime is a great way to assure you’ll get a VC8 into your hands as quickly as possible!

Just tell `em I sent you!