Are you into rechargeable lithium batteries yet? If you’re like most consumers, does getting a good deal excite you? Have you ever been tempted to buy cheap rechargeable batteries you’ve seen online? Well, before you siphon any PayPal dollars, let’s see if we can determine whether it’s a good investment or not.

A simple Google search for lithium batteries (which might be how you got here in the first place) will unearth a gazillion places for which to buy these popular sources of power.

Everyone knows how the prices for many consumer electronics have dropped over the years. But even with lower price tags, there’s an age-old warning that’s still as potent as ever… you get what you pay for!

So what about those cheap rechargeable batteries I teased you about a few paragraphs ago? Ohhhhh they’re out there, tempting you with exaggerated claims and super-blowout prices! 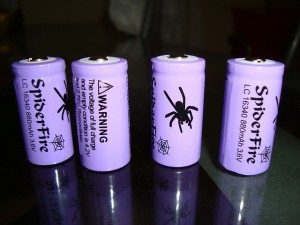 SpiderFire is another untrustworthy distributor

Okay so you’re looking at these rechargeable batteries. I’m going to presume more than likely that they’re 18650 size. What is the brand name? Does UltraFire sound familiar? How about TrustFire? What about SpiderFire? or TangsFire? Funny, how they all have “fire” in the name isn’t it? Not really.

What they’re banking on is that you might be familiar with Surefire…an all American company that became synonymous with  flashlights and lithium batteries.

Ironically, I’ve never seen a rechargeable Surefire battery before, only disposable primaries. So, the distributors (not necessarily the manufacturers) of these cheap batteries, are trying to convince you that you’re either buying something as reliable as Surefire…or that you know you’ve heard of another company with “fire” in the name, but can’t recall what it is. Who knows…maybe THIS is the one!

Wow! What a Deal! All THIS for THAT?

So, whatever “fire” these batteries have in their name, (or on their belly) they sure have a tasty price tag!

Okay. This number (in most cases) on ANY of the brands noted above is probably bogus. First of all, there are NO 18650 commercially available batteries (at this writing) that are greater than 3400 mAh!!! When you see an mAh capacity higher than 3400, it’s a complete exaggeration!! 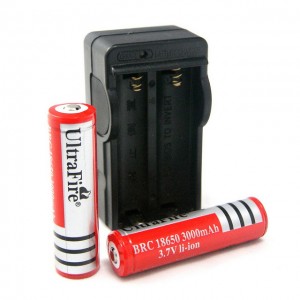 How many times must I reiterate… YOU GET WHAT YOU PAY FOR! And here is what you’ll get… which is very different from what they claim.

Some of these cells are no different than buying a used car. If there was something similar to a Carfax report for rechargeable lithium batteries, here is what it would indicate.

Many of these batteries come from such unlikely places as laptop battery packs. This is bad because the batteries can actually be “dead” on arrival.

There are reports where consumers have purchased several (a four-pack for instance) 18650 batteries at a time, and found no two to be either of the same capacity, OR the same age! As to the burned reference above, rare instances have caused faulty batteries to melt while charging, obviously destroying the charger as well.

IF YOU ATTEMPT TO CHARGE A “DEAD” LITHIUM BATTERY, IT COULD LITERALLY EXPLODE! (read THIS about lithium battery care)

The definition of a “dead” lithium cell, regardless of size, is if it arrives to your door with LESS that 2.5 volts of power.

Some consumers have realized that the “new” cells they bought, don’t seem to hold a charge for too long. After removing the label off the battery, they’ve sometimes come face to face with what the ACTUAL capacity is! For example, a 4000 mAh cell, (which already noted does not exist) could be 1000 mAh or even LESS! Does this make a difference you ask? Yes it does.

First of all, you’ve been lied to. Secondly, in addition to the cell not being able to perform as stated…it could also be previously used. How would this battery be useful to you, even if you only paid, maybe $5 for it?… and it then either caught fire, or simply refused to hold a charge after a month of use?? Would you feel cheated?

What About Other Sizes? 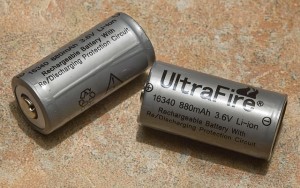 Not much better. The point to take away with this article, is that you CANNOT and SHOULD NOT put complete trust in ANY lithium-ion battery, regardless of size which is sold with any of the ‘company’ names described above. But… having said that, there have been exceptions.

Their Coat of Many Colors

Both TrustFire and Ultrafire batteries are sold with many different colored labels! Here are three of the Trustfire’s. 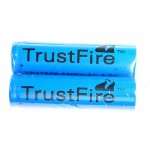 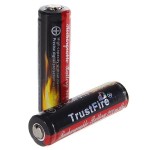 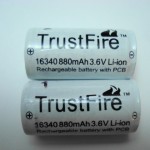 Also be aware that regardless of the label color, what is printed on the label is often not true. They will often claim that the battery is circuit protected. Most of the time, that’s not true. So a battery that you assume is safe to run to a lower voltage… is just the opposite.

And of course 99.9% of the time, the stated capacity is completely exaggerated. Here is an article about that.

There are some wonderful brands out there!

All the brands above are far more likely to perform as stated. I say ‘far more likely’ because there’s no such thing as infallible. Protection circuits, even on the best batteries have been known to fail. But at least on the brands referenced in this section, you WILL get the stated capacitiy. And you WILL get a NEW cell that will deliver excellent performance through hundreds of charges over the course of several years!

The ones you need to AVOID, are noted earlier in this article!

Then if they’ve bought them from Amazon, they’ll use them for a bit, and write a glowing review of how great they are. And the thing is, they may in fact be okay… or they may be the most dangerous item in their house! Either way, they’ll be given a 5 star write up! It all depends on WHERE the batteries came from. Something that no one can know.

If you choose to shop and compare at either Amazon or GearBest, you will find both cheap rechargeable batteries and those of unquestionable performance… which will of course cost you more! The reasons why you should avoid the cheaper cells are outlined above. The more expensive cells will pay for themselves over time, and provide you with much greater longevity and overall safety.

If you have any questions or comments about this post — please let me know by filling out the spaces below.