Are you among the many who have found lithium ion batteries to be both a powerful and economical choice for a variety of products? But how knowledgeable are you when it comes to lithium-ion battery care? This is important because if you’re a new user, there are several do’s and dont’s when it comes to these ‘possibly’ dangerous tools. 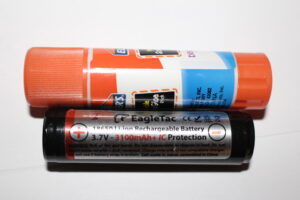 A typical 18650 battery compared in size to a typical glue stick!

The focus here is on rechargeable batteries. Primary (non-rechargeable) lithium’s still carry their warnings, as do ALL batteries for that matter, but it’s when the hazardous chemicals housed within the cell need to be rejuvenated, that a few precautions should be followed.

As long as you’re buying protected cells, you shouldn’t have to worry about the battery discharging too much while in use. The built-in circuit will cut the power around 3.2 volts. It’s a good habit though to periodically check the voltage of the cell. Many users agree that a lithium battery shouldn’t routinely be discharged to the point of automatic termination. This can shorten the life of the cell.

1/ The First Rule of Charging

Once you’re into the rhythm of regular recharging, there’s not much to think about. One thing you SHOULD have though is a digital multimeter, for the purpose of testing the voltage on your lithium batteries. It’s recommended that this be done before and after you charge your cells.

When purchasing a battery charger, make sure the unit features a CC/CV (constant current/constant voltage) method of charging. Some cheaper chargers tend to overcharge the cells. Lithium batteries have the potential to be dangerous if regularly mishandled. Should they become hot while charging, they can physically catch fire. It’s advised to always monitor your cells during a charging cycle, and not to leave them completely alone in case the charger detects a problem. Also, make a habit of removing the cells from the charger soon after they’re full.

Another important precaution when caring for your lithium batteries is to make absolutely certain when using two cells in a device at once, that they be of relatively equal charge when installed. Although stories of fire and/or explosions are rare, there’s a greater risk to such dangers when using two unevenly charged batteries in series (ie; end to end). Don’t run the risk of potentially holding a mini pipe bomb in your hands! 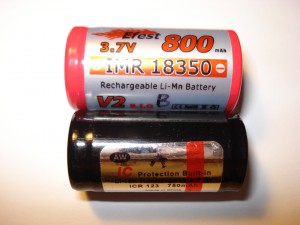 One of the many advantages of lithium batteries is that once fully charged, they keep 80% of their power for up to a year.

Say for instance you were using a device which contained a rechargeable battery, and suddenly were to lose it. Even if after several months you found it again, the battery would still be safe to charge IF the voltage were above 3 volts. If on the other hand it had drained to below 2.7 volts…then it’s advisable to toss it. Some chargers however will still be able to revive it without issue.

If you over-buy rechargeable lithium’s, and leave them sitting idle for several months at a time, then you might consider a long-term storage plan. This is because when sitting charged for long periods without use, (as in the example of losing one) the cell will deteriorate at a quicker rate than if kept in regular use.

It’s recommended that for months of non-use, the cell be discharged to roughly 50% of its total capacity. This usually equates to roughly 3.8 volts. The cell would then be placed in an air tight plastic bag and placed in the refrigerator. It should keep well under these circumstances almost indefinitely. Then when you’re ready to place it back in service, remove it from its chilling state, allow it to get to room temperature, and charge it up! It’s important to NEVER store a lithium battery below 32°F (0 Celsius)! And when entering its storage phase, be sure that the voltage be between 3.6 and 4.0 volts.

4/ WARNING! (if you buy from a discount merchant)

When you buy new cells, it’s advised to always check the voltage with a multimeter. If you buy quality brand-name cells, chances are they’re already partially charged.

If you go the “cheap” cell route from a discount merchant (on Amazon for instance) there’s a good chance your batteries might arrive dead! What I mean by that is the cells might register somewhere between 1.0 and 3.0 volts. If this is the case they could be old, used, and/or recycled product!

Discount sellers will buy batteries in bulk. Often, they’re factory rejects! The merchant doesn’t know in advance what condition the batteries are in! There’s a chance (albeit small?) that these batteries could be dangerous if you attempted to charge them!! In this condition, they should be returned for a refund. Old, over-discharged batteries have been known to “vent with flame” either in the charger, or in the device itself.

5/ When Cheap Batteries Can be Hazardous!

‘Vent with flame’ basically means that if a serious short were to occur within the cell, the chemicals could vent (which are harmful to breathe in by the way), possibly followed by flames!

If a battery is in the middle of a charge and becomes hot…unplug the charger immediately!

If while holding a flashlight, and the body (of the light) gets very hot…drop it, and move as far away from it as you can. Just in case.

Check out this dramatic video:

UltraFire is one of the cheapest, and most UN-trusted brands available. The same rule goes for cheap lithium chargers as well.

…and finally…Don’t Be Afraid, Just Be Safe

Please don’t let some of the warnings discussed here, scare you away from rechargeable batteries. I’ve been using them for years and have had no issues! BUT… I only buy reputable cells!! I keep them in sealed battery cases between uses. And although I try not to let them run down completely during use, it has happened on many occasions.

When learning about lithium-ion battery care, it’s really all about common sense. Keep in mind one thing though; lithium batteries (in general) are NOT considered consumer items. This is one reason why rechargeable lithium batteries are not sold in stores. Most of the time they’re only used as part of a battery pack, either in laptop computers or power tools for example.

It’s from the popularity of LED flashlights and electronic cigarettes that lithium cells have found their way into the hands of average consumers.

Rechargeable lithium-ion batteries are economical and last a long time. Just be smart and safe when putting them to use.

This link will take you to a page of good quality 18650 battery brands.

Have questions or comments? I’m here to help…just fill in the form below.