XTAR has put out some fine battery chargers in the past. Refer to this review of the VP1. I’d like now though to introduce you to yet another member of the family. This is the XTAR VC2 lithium battery charger. 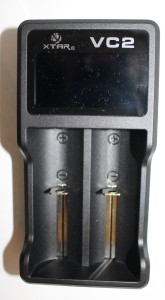 The VC2 is a two-bay charger capable of handling a wide variety of lithium-ion batteries.

The photo illustrates how the unit I received was packaged. 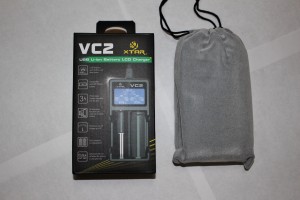 The unit was housed in a smooth velvet-like pouch with a handy drawstring. Included was a USB charging cable, and instruction manual. 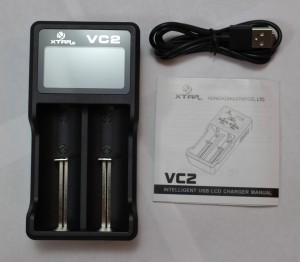 When using the USB… and plugged into a computer for instance

When using the USB… plugged into an AC wall adapter

So based upon this observation, batteries will charge FASTER when the USB connects with AC current.

When a full charge has been met, “full” will be displayed and the screen will flash three times every ten seconds.

The VC2 will charge each battery to 4.20 volts. The charging current will shut off when the peak voltage is reached. This differs from just about every other charger on the market… which provides a “trickle charge” once 4.2 is attained. But the VC2 will stop charging completely, thus not forcing the batteries to endure an extra charge, which they don’t appreciate.

Should you forget, and leave the batteries on the charger, the VC2 will begin applying extra voltage when the battery current drops below 3.90 volts. Theoretically they’d need to sit there for some time before that happens. I’m not sure if I would intentionally allow that to happen over and over, but this is the only charger I’ve ever seen that’s actually considered SAFE to allow it to happen in the first place!

The XTAR VC2 is pretty smart! Although I haven’t tried this… XTAR says that if a battery has reached **ZERO volts (or less than 2.0 volts)… (from being over-discharged) the VC2 will revive it! If the battery is too far gone to accept a charge, the unit will sense impending disaster, and shut off. The display will show “null”. This will be after about ten minutes of an attempted charge.

Falling under the banner of “safety precautions” is a feature known as Soft Start.

As the name implies, this is designed to not ‘jolt’ a battery with high current, that has been seriously depleted. For the sake of discussion we’re probably talking about one where the voltage is closer to 3.2 or lower. Generally speaking, lithium cells are said to be under greater stress when lower voltages are reached. So rather than stress the battery further with too much current at once, the VC2 will start a gradual (softer) charge. In this instance, the current will start closer to 350 mAh. It may or may not jump to 500 mAh before reaching termination.

I often let my batteries get close to 3 volts before a charge…and I’ve yet to see the VC2 activate that feature, but it may just be that the cells were healthy enough to not require it.

**A word of warning in this regard. Anyone schooled in lithium battery safety, will never, ever advise that a battery be (intentionally) discharged to below 3 volts. Unprotected batteries will allow this to occur, (unless they’re being used in a flashlight with voltage protection). But many batteries will suffer damage if permitted to discharge that low, and in some cases, making it dangerous to even ATTEMPT a charge thereafter. This is obviously where the VC2 can be helpful, by refusing to charge a battery that might of become damaged.

The VC2’s display is a series of little “digital” dials. 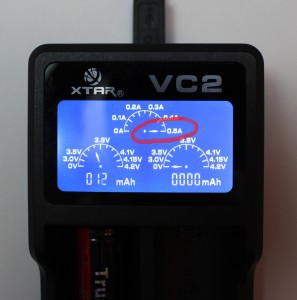 With each battery inserted, the dial directly above the corresponding cell will display its current voltage… as it inches toward 4.2 volts.

Beneath that, is a counter showing mAh capacity. This is useful if the battery has been completely depleted. Because once finished, you’ll see exactly how much current went into the cell. If the resting voltage of the cell is anywhere from about 3.0 to 4.1, you’ll still get an mAh reading, but it won’t be the full capacity of the battery. This is the same reading you’d get when charging NiMH batteries on a dedicated NiMH charger. 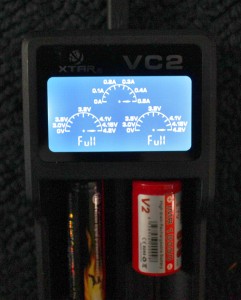 In the photo where “0.5A” is circled, the unit is only charging one battery (on the left). The dial on the right is idyl, and the lone battery is getting 500 mAh. This is what it will do when the USB is plugged either into a computer, or to an AC outlet. The current will drop to 350 mAh if a second battery is added, AND if it’s charging via a computer. Car-charging is likely to deliver similar results.

From testing and using the XTAR VC2 charger I can say with certainty that it’ll handle just about any lithium battery you can throw at it. The visual dials are well lit and easy to read.

Some experienced charger users might scoff at its 500 mA current limit. But if it takes an extra hour or two to charge a 3400 mAh 18650 battery, I say what does it matter? At least with the VC2 no harm can come to the battery by leaving it on the charger when it’s finished.

The XTAR VC2 lithium battery charger was provided for review by XTAR.

CLICK HERE to pick up the XTAR from Amazon.

Your questions and/or comments are also welcome 🙂