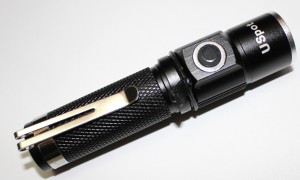 I heard about the Uspot from a press release email. The link within the release goes straight to the **Amazon sellers page.

I decided to buy it for a couple of reasons. A; it was less than $15, and B; the seller promises a 60-day money back guarantee if not satisfied. And lastly C; the company includes a 14500 lithium battery! 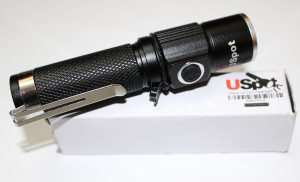 Uspot light and the tiny box it comes in

So, all you get with the Uspot is what you see in the accompanying photo.  The light is in a box just big enough to house it, concealed in a bubble pouch. No information is included.

Yes, “what you see is what you get”. A four inch light with a pocket clip attached, and a side-mounted on/off switch. It’s a good flashlight for EDC purposes.

How Does it Work?

Its operation is simplicity personified. 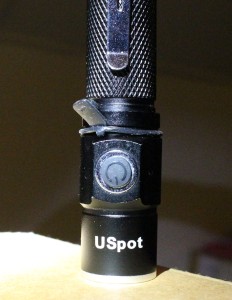 This can be very disorienting if you need to use the light in the middle of the night. Your eyes (in complete darkness) are not adjusted for high brightness. Using this light won’t help that one bit. Coming on in high mode is bad enough, but having to cycle through STROBE after you’ve quietly made your way from wherever, back to bed, attempting not to disturb anyone else, is enough to make the rest of the household think you’re under attack!

The USpot also has SOS. It’s hidden. It’s only accessible by pressing and HOLDING the switch for about 3 seconds. So as you click it on (in high)…just keep pressing, and SOS will engage.

Okay, so the Uspot flashlight includes a battery. Nice! …. or is it?

The battery they included in the package is a no-name 3.7 volt 14500 rechargeable lithium-ion cell. The blue, no-name cylindrical object has this info typed onto a homemade sticky label that covers part of the cell. It also says the battery is 900 mAh. Most likely an untrue statement.

I tested the battery right away. It read 4 volts. I started using the light for testing purposes, and had it on and off for less than an hour. A this point the battery was down to LESS than 3 volts! The beam was getting noticeable dimmer as well. Now it was time to confirm my suspicions.

With the voltage down to 2.50 (which is not recommended for the average battery)… I began giving it a COMPLETE charge. And here are the results:

Voltage-wise, it ceased charging at 4.15! (most will stop at 4.18-4.20) And what about capacity? Notice that the battery states 900 mAh. My suspicions that that was probably a fabrication turned out to be true. The cell only accepted 351 mA’s of current!! That’s OVER 500 mA’s SHORT of what it should be!

In short… the battery is unprotected. The battery is cheap. The battery does not hold a charge too long, nor will it stand the test of time. Although the battery you’ll receive with this light, may vary from what I received, doesn’t change anything. Because it’s free, you can be assured they’re going to include a bottom-of-the-barrel battery, that’s probably worth about $2. If I was to use and recharge this battery consistently, it would only continue to degrade. And since it’s unprotected, it will only degrade faster by discharging over the acceptable 3 volt limit. Whatever battery they send, DON’T USE IT!! Buy yourself some decent 14500 batteries.

The Uspot will only operate with a 3.7 volt lithium (AA) battery. I tested standard AA’s along with NiMH and it doesn’t work.

I should also note that there’s a small hole below the switch. The Amazon seller says this is a charging port and suggests that it be connected to an AC outlet in order to charge the battery! If you’re not looking for a visit from your local fire department, then I suggest  buying yourself a dedicated charger, whether it be lithium-ion only, or a multi-chemistry type.

The Beam, The LED and Other Useful Things

It’s difficult to know with any certainty how many lumens the Uspot delivers. The LED produces a very tight spot of light, hence the name, Uspot. 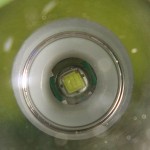 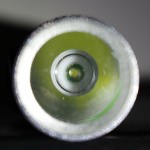 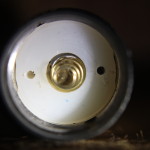 The listing doesn’t specify brightness, and I can only estimate that it’s in the neighborhood of 250-300 lumens.

The beam isn’t bad. It’s quite white, and only produces a few light rings. Its usefulness is seen more outside, where the beam can travel a fair distance. Indoors, in my opinion, is less useful.

The Pocket clip is quite sturdy, however it protrudes below the base, so tail-standing the light is slightly challenging. It’ll do it, but it’s not straight. Remove the clip if necessary.

So, the listing in *Amazon says a couple of things that aren’t true.

It states it’s a “tactical light”. No it isn’t. To operate tactically, it would need a rear switch. It doesn’t have one.

It states it has FOUR modes. It doesn’t. The light I received has high, low and strobe. SOS is not present, as the listing claims.

Okay, inside and out, here are a few lighting scenarios which might prove useful. Click on each image for a full-size view! 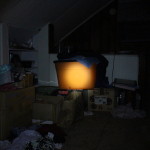 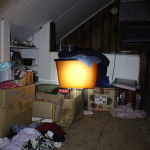 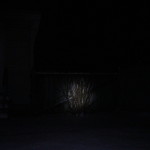 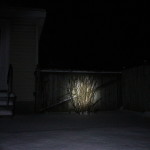 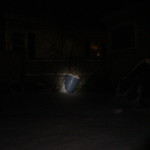 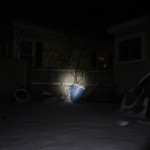 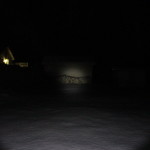 So…. am I satisfied with the Uspot LED flashlight? Not particularly.

Would I recommend it to a friend? That depends. Ask yourself if you think they’re responsible enough to charge a lithium battery. If so, then I guess so.

What would be my overall grade for the Uspot LED flashlight? A “C-“.

Here’s a link to the **Amazon listing page for popular everyday-carry flashlights.

**please note that as of last check the USPOT was unavailable at Amazon.

Questions or comments, absolutely! Just let me know in the spaces below.