In the world of flashlights, those that fall in the “budget” category have grown exponentially in the past couple of years. Every once in a while I’ll take a look at one, to see if their quality as a whole is improving. Today, I’m testing the AMZ vision, a 1000 lumen generic-type flashlight with a focusing lens. 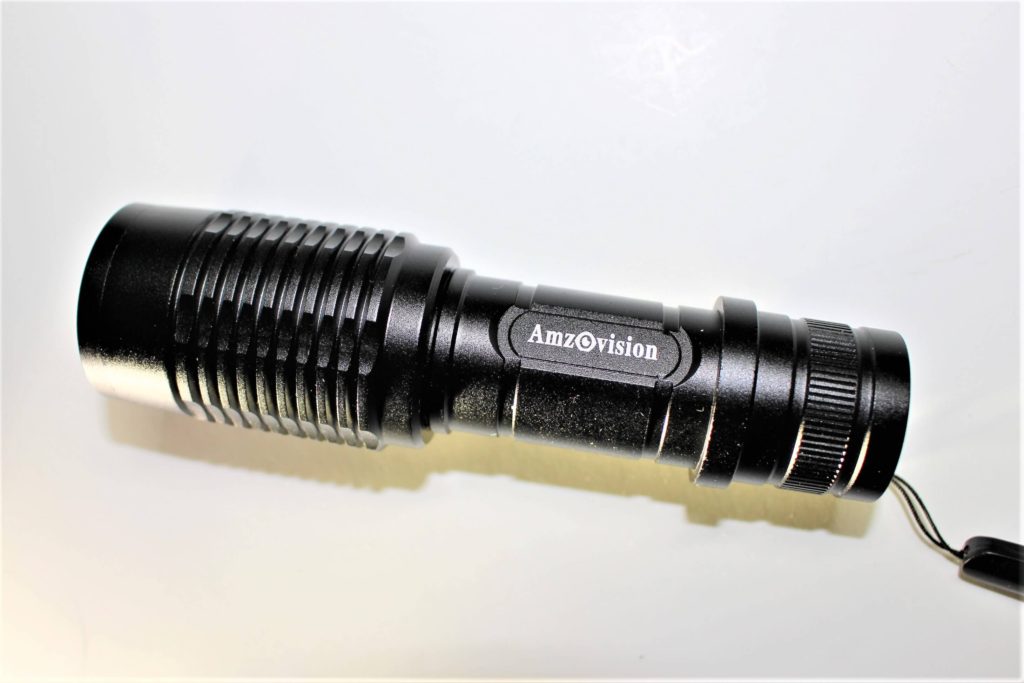 Generic Green Box and its Contents 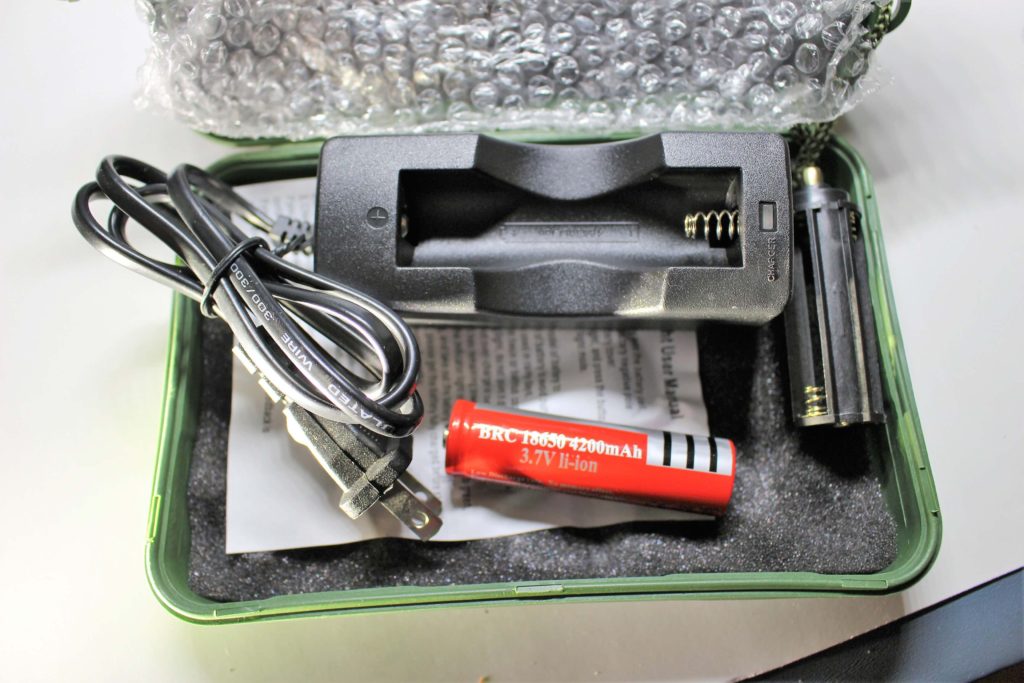 Many generic flashlights come packed in a plastic, side-latched, green box. The AMZ is no exception. Inside the box is the usual suspects! 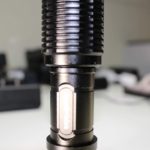 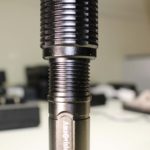 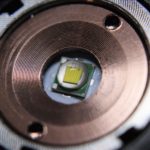 The one (and only) thing that sets the AMZ vision apart from other generic flashlights in its class, is its body style. The bezel end is completely different from the contoured “bulbous” head, featuring the useless ‘zoom-markings’ that have become standard on many others. Ultimately though, the width of the head remains the same.

Since it’s a “focusing-head” light, the body slides forward and backward, as a means of magnifying the LED within the head. When not focused, it’s 5.1″ long. In its focused-state, it’s 6″ long.

Flashlight weight with an 18650 battery, is 6.24 ounces (which of course varies depending on the battery).

The body is made from toughened aluminum, but because it sustains scratches quite easily, it’s obviously not hard anodized!

The LED is a CREE XM-L… possibly T-6…. which is semi-standard in generic lights.

Online statistics claim the light is waterproof… but of course it’s not IPX-8 (submersible). They also claim it’s “shock resistant”, but do not say to what degree.

Beam distance is said to be within 200-500 meters. (the low end would be more accurate)

Top output is (advertised at) 1000 lumens. (yeah right… and chickens have lips!) 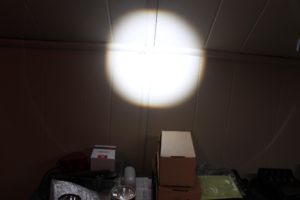 The absolute standard with flashlights of this ilk, is three general modes, and two for emergencies.

I haven’t tried the light using 3 standard AAA batteries, but I DID test it out using 3 rechargeable NiMH AAA’s. The verdict; they provide HALF the output that a 18650 does. 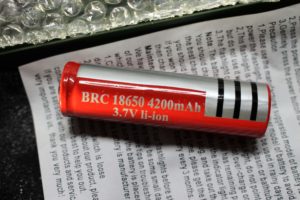 As if I haven’t said it enough… when 18650 batteries are included with generic flashlights, the end result is a weak, and unprotected battery, which shouldn’t be trusted, or expected to provide long-lasting performance.

The label states a capacity of 4200mAh! My response to that is, gimme a break! Naturally I tested it, and after a discharge to 2.75 volts, it charged completely with an accumulated capacity of just over 1000mAh! Naturally (as of this date) a 4200mAh 18650 battery has yet to be conceived.

This is a standard, single 18650 battery unit, which is supplied with many different kits. On the rear of the unit, it reads “Output; 1000mA”. This appears to infer that the unit is supplying the battery with a current of 1A. My reaction to that; bull****! I ran a poor quality 18650 battery through the unit, which has a capacity of LESS than 500mAh… and the charger took OVER 2 hrs to complete the charge! I drained the battery to 3 volts and ran it through a different charger at a FULL 1000mA. The result THAT time; it completed in 42 minutes!!! With this result, it is determined that the included charger is putting not more than 250-300mA into the battery.

For people who are unfamiliar with LED lights, the basic operation of a flashlight like this is a challenge. Instructing someone though, takes about thirty seconds. 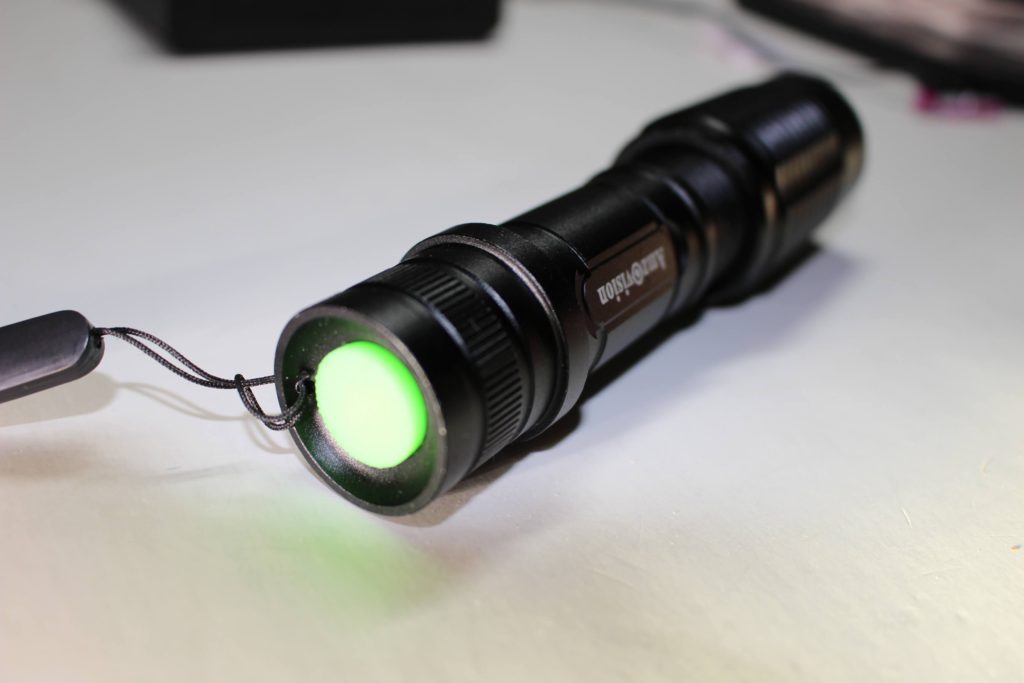 Click the green switch on the tail to turn it on. “High” is the default. Each half-press thereafter, changes the mode. The sequence is high>medium>low>strobe>SOS. There’s no mode memory, so “high” is where it begins again, after being turned off.

To narrow (or focus) the beam, pull the head forward. To widen, do the reverse.

Checking Out the Beam 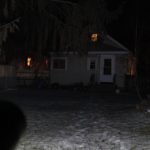 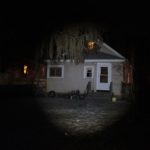 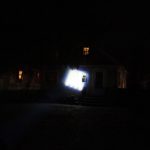 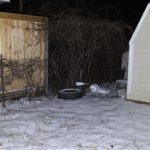 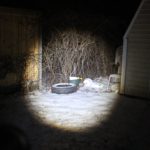 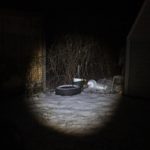 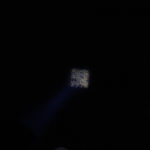 I don’t generally like flashlights such as the AMZ vision, because I feel they’re vastly inferior to “regular” LED flashlights. In this case, “regular” means non-focusing types.

As with ALL generic lights that come with a full accessory kit… the “extras” are basically useless. The only time I would recommend the kit, is when it was purchased by someone, who ONLY bought as an emergency kit. In other words, for very “limited” use, is the only time I can see it being useful. If you’re someone who plans to use it for outdoor activities; camping, hiking, etc… DON’T buy it! Or, buy it ONLY for the flashlight, then make separate purchases for batteries and a charger. If you buy it for everyday use — or worse — to use at an overnight job… you’ll find yourself in “frustration mode” most of the time. This is because the light will only be bright for a short while after charging the battery, and as a result, the battery will spend 80% of its life, SITTING in the charger!

About the only positive remark I can make about the AMZ vision, is that it actually HAS a CREE LED! Many generic lights claim their LED is made by CREE, when it’s not.

Obviously for the low price-point, you don’t get much. There’s no regulating circuit, so when using an unprotected battery, the light will run until zero volts is reached. This usually kills the battery permanently. The modes are poorly spaced, as they are on ALL generic lights, so “low” isn’t much lower than medium, and medium isn’t much lower from high! Other than defaulting to high, there’s no instant access to any mode.

If After Everything I’ve Said…

….you believe the AMZ vision is either the right light for you, or someone who’s basically housebound and won’t use it that much… then by all means visit their Amazon page and take advantage of Prime shipping!