Features To Consider When Choosing An LED Flashlight

Holidays? Birthdays? A special gift for yourself? Whatever the occasion, a new flashlight can be both unique and practical at the same time. Therefore, this guide on which features to consider when choosing an LED flashlight will come in very handy.

The flashlights of today have made exceptional strides over those that were available even ten years ago. Like most of what makes up the world of technology these days, computer

chips and other electronics, have turned even simple items into what would’ve been considered ‘futuristic’ not too long ago. We may not be living like “The Jetsons” just yet, but the good `ole flashlight that found its way to the back of the drawer in your dads or grandfather’s house……has come a very long way!

Here are some of the ways in which the LED flashlight has improved, coupled with the features you may or may not consider important. 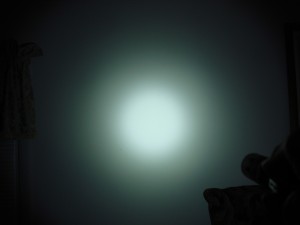 The average life expectancy of the average LED is 50,000 hours… (which you can measure in years!)

As of this writing, the CREE XM-L U2 LED is being used in many new flashlights. This LED, like others in the XM-L family, provide a nice smooth beam of light with a bright center-spot and ample spill. (The photo here is typical of an XM-L2 beam; taken at 6 ft.) With a few exceptions, just about any light using an “XM” LED, will be an excellent choice.

Clearance lights, or those with lesser-known brand names might offer lights with older LED’s. An example of this would be anything noted as “XP” followed by ‘G’ with an R3 – R5 – E – Q5, or some such identifier. Please note these aren’t bad LED’s, they’re just among the first most popular LED’s, which today would be considered older technology. So in comparison to the newer LED’s, they simply can’t offer the efficiency or the capability of producing as much light as you’ll find in a newer LED.

This article explains why buying a cheaper (lesser quality) flashlight, might not always be in your best interest.

Most lights available today offer at least three lighting modes. Low, medium, high. Many will also offer a Turbo mode, which is good for a quick burst of exceptionally bright light. These lighting modes are usually measured in lumens. Except on some cheaper lights, the lumen levels might not be divulged.

The stages of brightness the light offers, is dictated by its total lumen output. In your average 800 lumen flashlight, the modes might begin at the “moonlight” level, where one lumen is the norm. Low will often be in the ten to thirty lumen range. Medium, somewhere between one hundred and two hundred. High mode could be six hundred lumens, then turbo at 800.

On the cheaper lights I spoke of, many will eliminate medium all together, and offer a simple low and high. However, it’s worth noting that even SOME higher-end manufacturers will produce the occasional light that features high-brightness with a simple low and high interface. These would actually be more standard-use for military and law enforcement.

This is where you’ll see offerings such as strobe, beacon, and SOS. These are primarily used for everyday emergencies, or self-defense. Some users might refer to these as “disco lights”. I think if you were ever stranded in a broken-down car on a lonely road…. after dark…. that you might actually find these modes useful! Therefore having a true SOS distress signal could be a lifesaver! Even if you’re blessed to have “OnStar” in your car, your emergency could be on the day their satellites are malfunctioning. 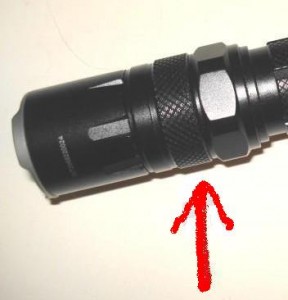 A Variable Control Ring provides the user with custom brightness

That’s a fancy term huh? What this refers to is the ability to select your most desirable level of brightness depending on the situation.

The photo here illustrates what the average control ring looks like on most lights. Adjusting the electronic ring will smoothly increase, (or decrease) the amount of light from its predefined lowest mode… all the way to the highest setting. Much like a wall-mounted household dimmer switch will do. Strobe and SOS might also be added to the ring.

The Nitecore SRT5 is a 750 lumen light that features a variable control ring.

This perhaps is the only area where a modern flashlight has emulated a favorite feature of yesteryear. 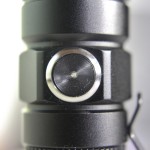 Whereas most lights will switch-on at the rear, at great majority today come equipped with a side-switch!

Pictured, is the side-switch featured on the Olight S30 Baton.  On this light, it’s the only switch. Some lights have BOTH a side and a rear tail-cap switch. In that case, the light will turn on at the rear, but the mode-switching will be done with the side button. But in this case, all operations are done with one button. Very few if any LED flashlights had side-switches prior to the last two or three years.

A tactical light is simply one that when the rear switch is lightly pressed, the light will illuminate, until the button is released. If it’s non-tactical, the button must be pressed until it “clicks” before the light will work. Typically, tactical lights are a favorite of those who wish to use the light in situations where they don’t want the “clicking” sound to ‘blow their cover’ so-to-speak.

In most cases, ONLY lights with a rear switch can operate tactically.

Here at Lightsngear, we talk extensively about batteries. 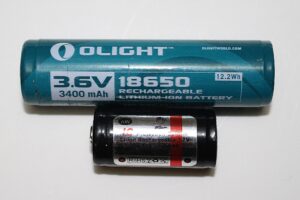 Just click batteries on the top menu bar, and you’ll be taken to multiple articles detailing the many different forms of them that are available today.

Basically in your internet search, you’ll  come across lights that still use standard AA or AAA batteries. These can be either disposable Alkaline or an NiMH rechargeable.

What you’ll see most often, are lights that ONLY accept specialized Lithium-ion batteries.  Pictured, is a rechargeable 18650 battery (top) and a 16340 battery (bottom). The 16340 is also known as RCR123 because it is the rechargeable version of a CR123 disposable, which were quite common in cameras before the digital days. CR123’s are available at most stores, but unless you purchase them online, operating a flashlight with them will cost you a fortune!

Please note: MOST LITHIUM-ION BATTERIES ARE RECHARGEABLE ONLY!!

Just about ALL rechargeable lithium batteries need to be purchased online. You can see an impressive selection of lithium cells by clicking here. 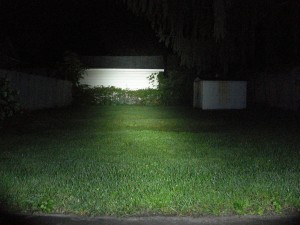 Here’s an important factor when choosing an LED light. A decade ago, finding a light that featured 100 lumens was often an “oh wow” moment in technology.

Keep in mind that using a light indoors, in complete darkness, won’t take much to light up a room (especially if you’ve been sleeping). But take that indoor light outside…and you may not be able to see beyond 20 feet in front of you. That said, most flashlights that are intended for outdoor use…for instance; hunting, hiking, searching, walking etc…will probably need to be AT LEAST 200 lumens to be useful.

There are literally dozens of lights today that feature maximum lumens of 500 and beyond. Depending on the type of LED used, these lights may also have the capability of projecting a beam of light in excess of 200 meters! Plus, many of these lights will also go as LOW as 1 lumen!! The outdoor photo illustrates a good quality beam. The white building is about 75′ away. If the building weren’t there, the beam would go a much greater distance.

If you have questions or comments regarding this article, I encourage you to contact me and I’ll respond personally.

To begin your search for the ultimate flashlight, click here!!!