Home Accessories How I Managed to Improve HDTV Reception

How I Managed to Improve HDTV Reception

In my quest to improve HDTV reception at my house I started by analyzing where the weak spots of my present setup were. If you’ve read any of my other posts on this subject, then you’ll know that my location isn’t challenged in the fact that I’m too far from the transmitters, but because those that are available, is a mixture of VHF & UHF signals. 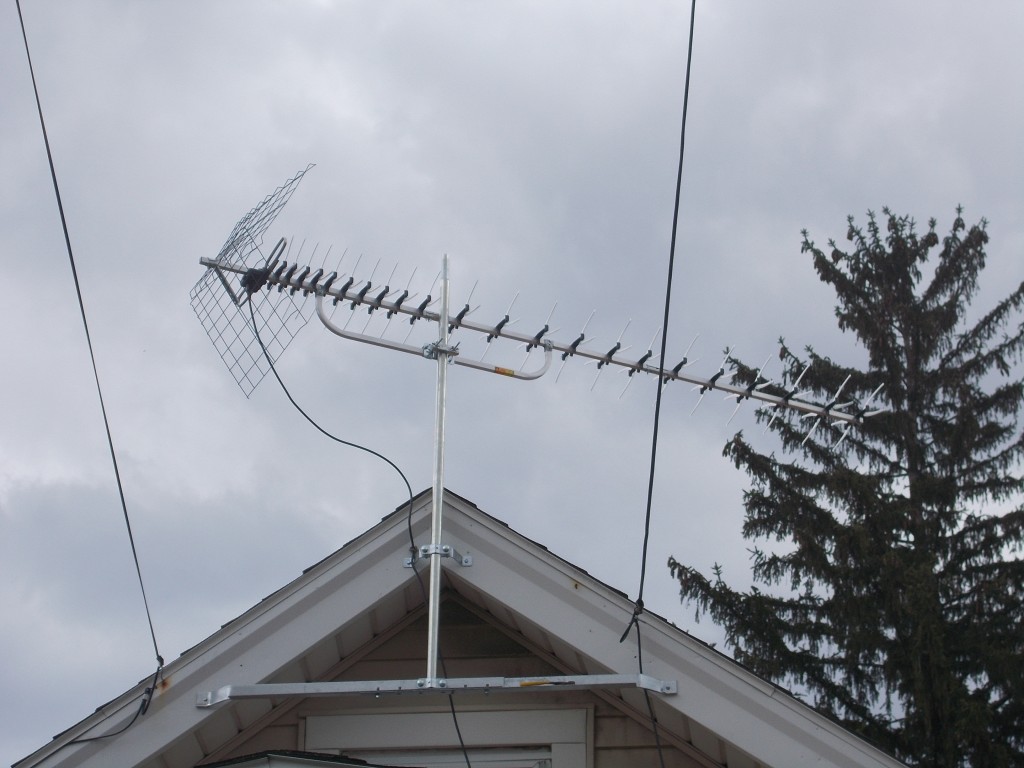 So, with the majority of my local channels on UHF, I decided on the 91XG by Antenna’s Direct. This decision was based upon a couple of channels that would be considered “extreme-fringe”. The linked review above explains that the 91XG has done an impressive job with UHF reception (the farthest signal is at 37 miles) as well as all FOUR of the available VHF channels.

More recently though, since the spring and summer have bloomed, my perfect winter conditions have shown signs of deterioration since the neighbor’s enormous tree has 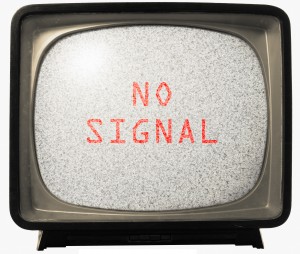 created a blockage to weaker signals! This has resulted mainly on the VHF side where I get sometimes excessive pixillating. (I hope the spelling there is correct! Spell check hasn’t heard of it) Just my luck, the station I was having the most problems with, is a lower-power VHF sub-channel (on RF ch. 13) showing many of my old classic favorites. The problem seemed somewhat weather related too. But that big-old tree appears to be the main culprit. Anyway, since the 91XG is a UHF antenna, I figured my ONLY solution was to improve the VHF signals as much as possible.

In my quest (the second of this article) to locate an inexpensive VHF outdoor antenna, I came upon the Antennacraft Y5-7-13. 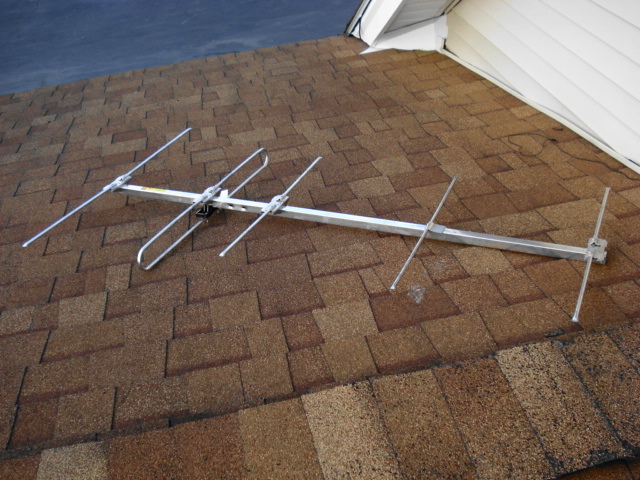 So once the new VHF antenna was unfolded and mounted, I was delightfully surprised at the reception it gave me! All the VHF channels…including Ch. 6! … and the other one giving me pixel issues, are now steady. I tested the Y5 on its own at first, just to get a feel of its capabilities. This is where it delivered every VHF channel just fine, AND all the regular UHF channels too!! Huh? That’s right…the UHF’ers that had been scanned-in with the 91XG, (including one that’s 17 miles away and picked up from behind) were all present as well. I do attribute the pickup of the Antennacraft mostly because the majority of these signals are no more than 15 miles away. The Y5-7-13 is rated at 60 miles. Here’s what the setup looks like now, with the 91XG accompanied by the Y5-7-13. The reception of both antennas are now combined. I bought a combiner/splitter that accepts VHF & UHF signals simultaneously and sends both signals to the TV via a coaxial lead. 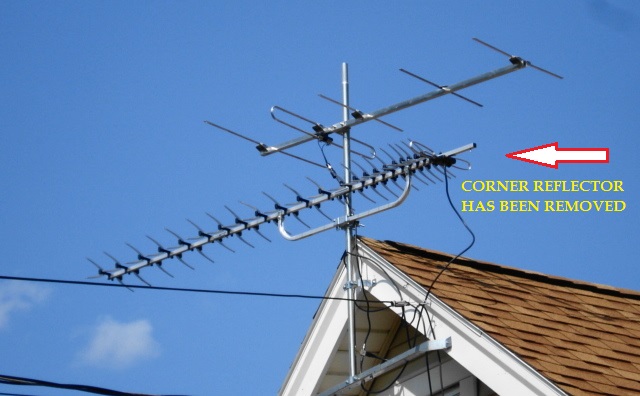 Now I can have the VHF antenna pointed AT the VHF transmitters, and the UHF antenna actually pointing in the opposite direction to receive farther away channels, while it receives the closer UHF channels from its backside!! I also removed the corner reflector of the 91XG (see the photo above) in the hope of it picking up those “rear” signals with greater ease.

From this experience, I would recommend the Antennacraft Y5-7-13 to improve HDTV reception on the VHF band. The majority of North American TV markets utilize UHF more than VHF, but there’s often at least one station lurking nearby that can be found on the high end of the band.

To check availability of the Y5-7-13 look here!

My review of the Antenna’s Direct 91XG (with purchase link) is here.

Your comments are welcome, in addition to any questions you might have about your own quest to improve HDTV reception!