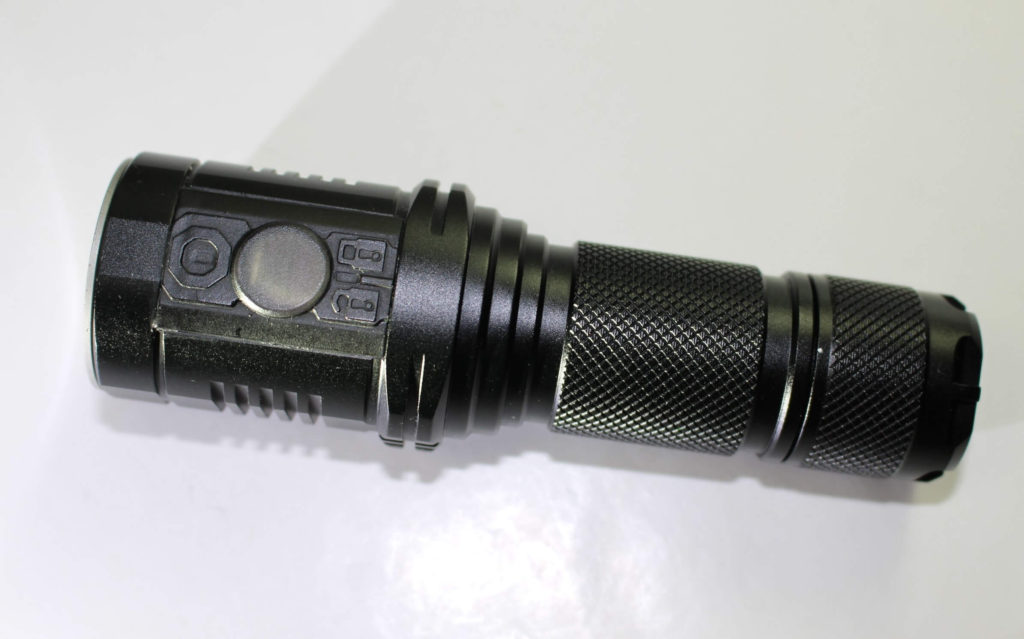 Imalent already has a few flashlights under their belt. The new Imalent DN11 is the first of their products that I feel privileged to review.

On the surface, it “looks” like a lot of other EDC flashlights that have been released in the last year. But, as we know, looks can be deceiving. Read on to discover what sets the DN11 apart from its predecessors. 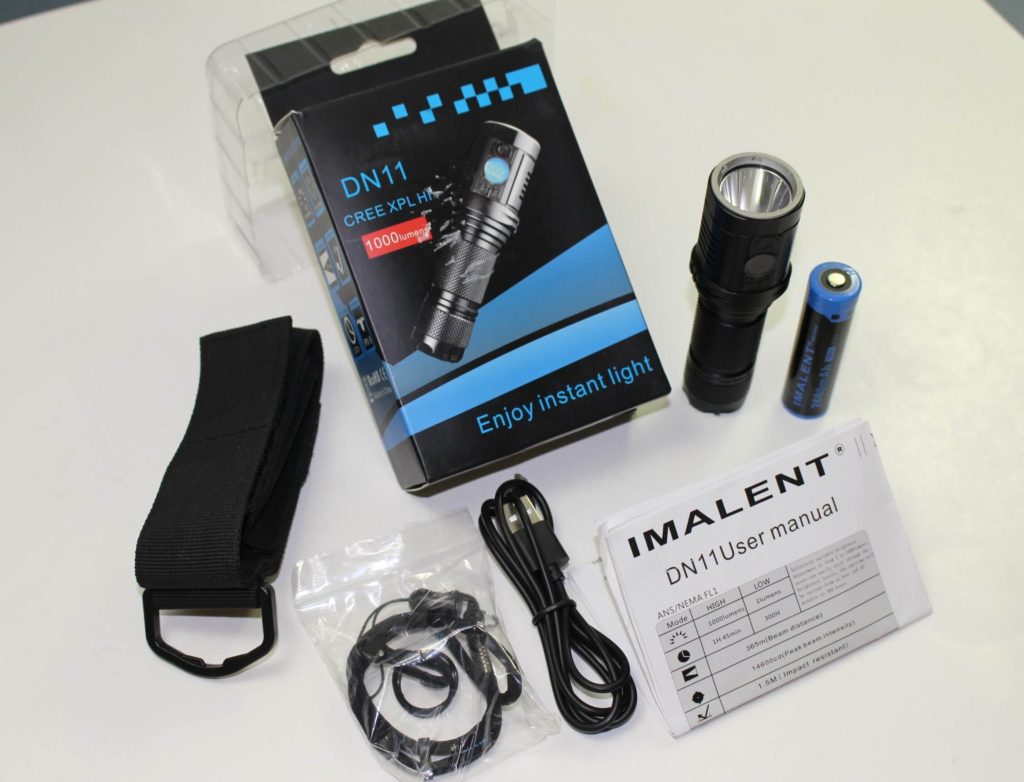 From the picture you can see that Imalent has compiled some nice accessories into this package.

A plastic cutout inside the box includes the flashlight. On the flip-side is a Velcro belt holster, a manual, a micro USB cable, a small package containing spare o-rings and an adjustable lanyard, and an Imalent 2600mAh 3.7v rechargeable battery! The only thing missing…is a pocket clip. There isn’t supposed to be one…but that’s a personal preference. 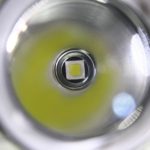 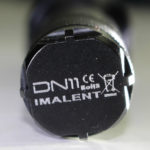 The DN11 features a Cree XP-L HI LED which in this case is responsible for its 1000 lumen output. At the opposite end, an extreme low of 1 lumen will illuminate up to one foot away in pitch darkness.

As you may of deduced from the accessory package, the DN11 is intended to run on one 3.7v 18650 battery, which Imalent has generously included. Alternatively, (per the manual) you can use two disposable CR123’s. Doing so however will render the built-in charger useless. More on that coming up! 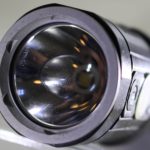 Similar with other EDC lights in this class, the DN11 measures  4.3″ long. Weight-wise, including the battery, 139g.

The lens is ultra-clear, scratch resistant, tempered glass. The body is made from aerospace-grade aluminum alloy and is TypeIII Hard Anodized (it won’t scratch).

Here’s Where the DN11 is Uniquely Different

Unlike the majority of other LED flashlights on the market today, the DN11 has NO standard selectable modes. Instead, it uses an “infinite brightness control” system!

Three “flashing” modes ARE available. Strobe, SOS and Location Beacon. But as with all quality flashlights, you won’t see them, unless you want to. 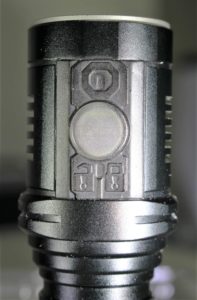 There’s no rear switch. There is however an electronic side switch which serves as an on/off, up and down button. No clicking is ever heard when operating the DN11. Most lights with a similar system offer a control ring, so this is a first! How does it work? Keep reading!

Now if that’s not enough, between the up and down control switch is a small digital display! For about the first minute after the light is switched on, the display lights up with useful operating stats! For instance when you first insert a battery and turn it on, 1000 appears in the display, meaning 1000 lumens of course. After a second or two, the display switches to “nominal” battery voltage (3.7) then toggles back and forth between lumen output and the voltage.

Other stats shown by the display is a battery icon, for when you’re charging an 18650. Then if the temperature of the light gets beyond 55°C, a temperature alert icon will let you know it’s time to turn the output down a little. Then when you activate one of the three emergency flashing modes, the display shows you which one you’re in.

So, Here’s How it Works 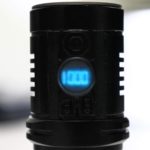 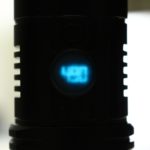 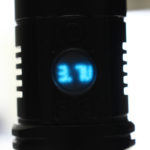 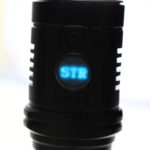 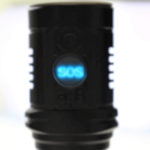 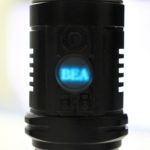 To switch on the Imalent DN11, you need to give the TOP portion of the electronic switch a fast DOUBLE-TAP. To turn it off, a single tap is all that’s required.

Remember, there are no regular lighting modes. So all you’re doing is dimming and increasing the output. The good thing about that, is you can stop it wherever you need it. It’s the ultimate in customized output!

So how do you dim and increase the output? Just press and hold the electronic switch. If you want to decrease, you’ll press the portion below the display. To increase, just do the opposite to the top portion. As you hold it, the output in the display will digitally increase or decrease. Meanwhile the beam will get brighter or dimmer.

To access the flashing modes, you must double-tap the up button while the light is on. The sequence is strobe>SOS>location beacon. A single tap cycles through each one. The only problem within the flashing mode, is that if you’re in strobe or SOS you CANNOT return to the regular mode without going to location beacon first! That can be a bit annoying. A single tap following “beacon” returns to whatever level of brightness you were using before.

It also has memory. Whatever output setting you have it on when you switch it off, is where it’ll return to the next time you turn it on 🙂

Please note: The photos of the display were hard to get focused on the camera. Plus, even with your naked eye, they tend to be a tad “blurry”. 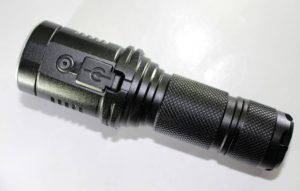 Showing the charger side 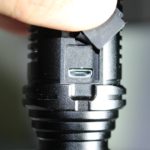 When it’s time to charge, just plug the included USB cable into the opposite side of the light that the switch is on. The other end of course will go into wherever a USB plug is available. Once connected, the blue battery icon will illuminate in the display and STAY there until the battery is fully charged… at which time it will disappear. 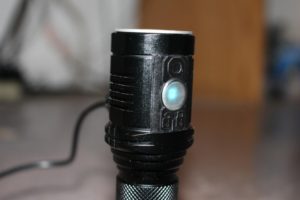 Total charging time is dependent on battery capacity and the voltage level when plugged in. The DN11 will alert you when the battery voltage drops below 3.1  When this happens, the battery icon within the display will blink about thirty times a minute. The voltage indicator and other stats are not available during this alert.

Let’s Check Out the Beam 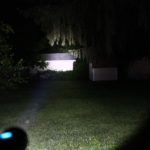 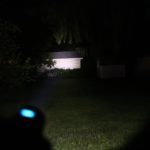 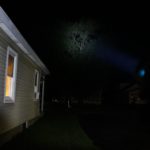 On tree across road 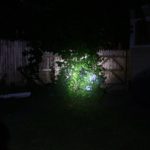 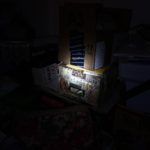 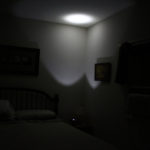 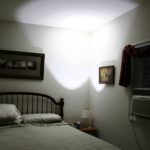 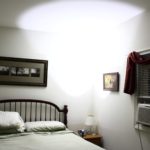 The electronic switch is quite responsive. Sometimes switching it on takes more than two taps, since it seems to respond to a particular speed and level of pressure. Raising or lowering the output is always responsive. One thing that I’ve noticed is if I have the light ON, and standing on its end, if I pick it up by the head, I inadvertently turn it off without realizing I’m touching the on/off switch.

The one very puzzling thing, is that if you look closely at the switch control picture, you’ll see a “lock” and “unlock” (button) below the display. While this is the “dimming” button as well, one would assume that it also serves to “lock-out” the light to avoid any unwanted activation’s. There is NOTHING in the manual that mentions this! And I’ve also tried tapping/holding the button in various configurations to see if I COULD get it to “lock”… but nothing changes after doing that.

The voltage readout is only somewhat useful. With a fully charged battery, it never shows its “actual” voltage…only the nominal 3.7 voltage. If it were able to show 4.17 for example, that would be fantastic.

The digital display (in general) is useful, however, the readout is a tad blurry. The digits are also very close together, often running into each other. It’s not UN-readable, but if you’re like me and wear glasses to read, you may need them to clearly see it.

So overall, the DN11 is a very good flashlight, but like anything else I suppose has a few areas where some improvement would make it just about perfect.

As the distinct possibility exists, that the DN11 might not be available, I invite you to visit Banggood.com for a good selection of other Imalent products.