Home Accessories Should You Buy A Flashlight for Self Defense?

Should You Buy A Flashlight for Self Defense?

Everyone knows flashlights are for…..light…..what else? A cell phone on the other hand is certainly used for a lot more than just making phone calls! But has anyone ever suggested buying a flashlight for self defense? Let’s talk about it and find out.

Where Does It Say “For Self Defense”?

In case you haven’t noticed, LED flashlights have become more like handheld electronics in recent years. The bells and whistles included on many of them are about as high tech as any “everyday carry” device.

In contrast, here’s a short list of flashlight features that CAN be used for self defense.

So, this is when you look at the HEAD of a light, and the area circling the top of it, is rough, or chiseled out. On some lights this is referred to as a “strike bezel”. The obvious use with this is to break glass. I’ve never tried it, so I can’t attest to its effectiveness. It will also differ from light to light, and will depend on the aggressiveness of the surface.

Smashing a car window in an emergency, is perhaps good use of a strike bezel. Or to gain emergency access through the closed window of a house. Using it to strike a PERSON could worsen a scenario which otherwise could’ve been handled more efficiently by shining the light in their eyes.

This can be useful, as “tapping” the tail of the light (IF it supports tactical use) will produce bursts of light usually in turbo mode

Most flashlights, as long as they’re of “good” quality, will allow the user to select certain modes “on demand”. In most cases, this will be the lowest mode (moonlight/ultra low), the highest mode (turbo) and the “emergency” mode (usually Strobe). In most cases, activating these modes work best when the flashlight is already off. But you can usually get to them if it’s already on, as well.

In terms of a flashlight for self defense, strobe is what you would namely use to blind, and/or potentially scare off a would-be attacker. Turbo mode would certainly blind them, but the “strobing” effect is something NOBODY can tolerate, especially if it’s pointed at them. The only caveat to using strobe as a deterrent, is distance. The closer you are to your target, the more effective it will have. Unfortunately, this may also mean you’ll need to BE attacked, in order to use it to full advantage. I’ll discuss the issue with THAT, momentarily. 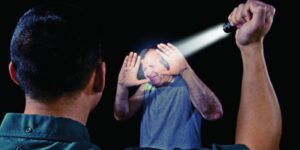 It’s not hard to imagine that the objective of most attackers, is to take their victim by surprise. As is often dramatized on TV or in the movies, an attacker might approach a victim from behind. Even if carrying a flashlight in your hand…being grabbed from behind would make it a  challenge to activate (if it was already off).

The Cheap Ones Are The Worst

With cheap flashlights it’s even worse! Those that sell for less than twenty dollars (online or as part of a “TV” offer) also have strobe, but do not offer “on demand” modes. Lacking mode memory, “momentary on” and instant access, a cheap flashlight needs to physically be clicked ON first, THEN requires the user to CYCLE through THREE modes even before reaching strobe! In a surprise encounter, the victim has already BEEN attacked, even before switching the light on!

The only positive to that situation, is most cheap lights have some form of a crenelated bezel. Therefore striking the attacker with the head of the light, is the ONLY form of defense available.

SHOULD you buy a flashlight for self defense? Or shouldn’t you?

Carrying “weapons” of any kind can be risky. If you feel secure having it, that’s fine, but it certainly shouldn’t lull you into a false sense of security!

As far as flashlights go, I wouldn’t recommend buying one JUST for self defense. The reason being, if you didn’t use it on a regular basis, then HAD to use it to defend yourself, chances are you might forget how to activate the defense modes…especially if you’re approached unexpectedly.

In today’s flashlight market, there are dozens of wonderful lights with more features than you might ever need. Manufacturers are constantly redesigning their products when new releases are introduced. At the same time, LED’s get upgraded periodically as well.

My recommendation would be to buy the type of light that is best suited for YOU, with regards to what you think you’ll need it for. If self defense is part of that, no problem.