Here is the GearLight S1000, an LED flashlight made from a “mold” which has now become an industry standard for budget flashlights.

As it is uncommon for me to test lights of this design, the purpose of my review is to examine whether it’s any different from the several dozen other lights available EVERYWHERE on the internet, (and even TV) with the same design. So, IS it any better, or worse??? Keep reading to find out. 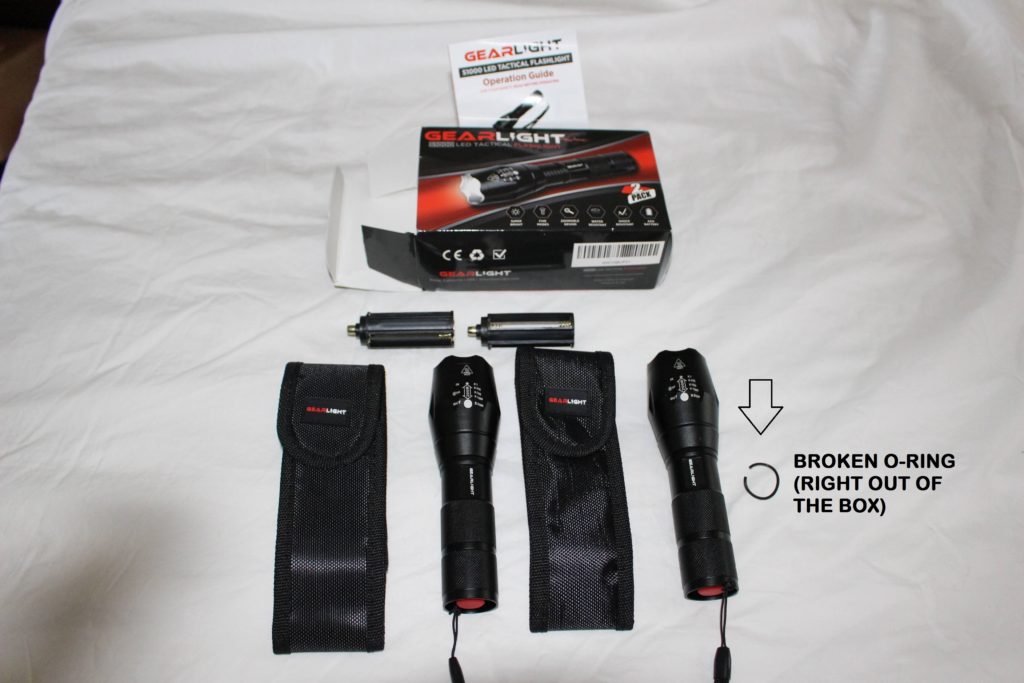 I simply don’t know if this will be the “norm” for the S1000, but the Amazon offer I responded to, was for TWO flashlights… which is what I got. 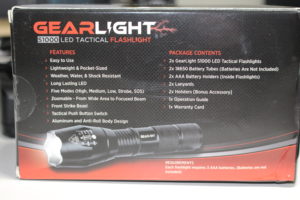 Back of the box

Everything in the box was doubled. There are two lights, two AAA battery cages, two 18650 adapter tubes, and two belt sheaths. One user manual covers both.  The flashlights were wrapped (separately) in bubble wrap. There are no batteries, spare o-rings, or tail cap covers.

The included picture details it all… even the broken o-ring that fell off one of the lights. I just realized however, that the 18650 “tubes” did not make it to the photo shoot! (my bad). Customer service seems attentive, since having left a detailed review on Amazon, they’ve already pledged to replace the light which the o-ring arrived broken on. A+ for that!

Features (if you want to call them that)

Since these are budget lights, there are no typical features, as found on higher quality flashlights.

The modes are as expected; high, medium, low, strobe and SOS (in that order). The manufacturer does not divulge output. But, since it’s no brighter than other lights I own of the same design, I’m calling “high” to be within the 300-500 lumen range. Medium is estimated around 200 lumens, and low, about 100. Please refer to the “Closing Remarks” paragraph for my editorial on the modes.

The package does not identify the LED, but it appears to be a standard XM-L T6. 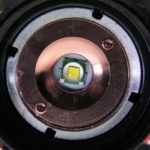 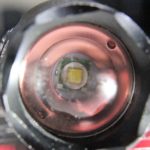 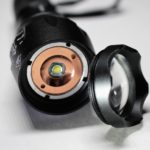 The box claims it’s “water resistant”. Obviously it should do fine in the rain, but without an IP-X rating, unless you want a flashlight that’s only usable as a paperweight, DO NOT submerge it!

“Shock Resistant” is another claim on the box. You can take that with a grain of salt, since there’s no “drop-rating”. I’ll reveal my own drop test later in the review.

Of course to most people who buy these lights, the BIG selling point, and MAIN feature, is the ability to focus the beam from very wide, to very narrow. The easily removable convex lens makes this possible.

As for batteries… the package only references three AAA’s as a power source. Naturally it also accepts an 18650. And since there’s no mention of a working voltage range, it’s good to assume that two CR123’s, or two 16340’s are probably a no-no! If you want to run the risk of “popping” the LED, give them a try!  😈

In a side by side battery comparison, one light used three NiMH’s and the other, a 18650. As far as output intensity was concerned, I couldn’t tell the difference between them. Whether this is good or bad, it’s worth noting since other lights of this design, display a higher output when using just one 18650.

For either standard AAA’s or rechargeable NiMH batteries, you’ll need to use the supplied “cage” to insert them into. Just place the whole unit inside the light. To use an 18650, just put it into the clear sleeve, and then into the light. You don’t HAVE to use the sleeve, but chances are if you don’t, the battery will rattle. If you have a baby in the house, but don’t wish the expense of buying him or her a baby rattle… then the light with an 18650 inside (tube-less) will suffice!! 😉

Fully click the switch on the bottom for instant illumination. Even though they call it a “tactical” light, there’s no “momentary-on” by half-pressing the switch from the OFF position. So, in my mind, to claim it’s tactical, is simply untrue. 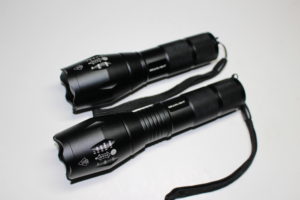 With head retracted and extended

Once it’s on, a half-press advances the modes. There’s no mode memory, and “high” is the default… so once OFF, it will always return to HIGH the next time it’s activated. Rapid clicking of the switch once ON, will also advance the modes… and could possibly wear out the switch faster, if this is your preferred method.

For strobe and SOS, advancing through the first three modes is required.

To tighten the beam, pull the head forward. At full focus, you’ll get the “standard” square (image of the LED) box-beam, complete with the striped diodes going through the center. Yuck!

Give the switch a noisy click, to turn it off. 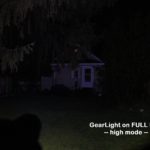 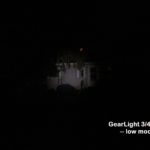 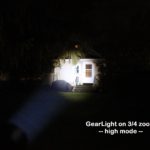 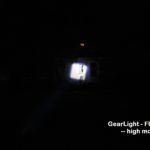 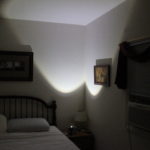 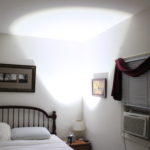 My Very Own Drop-Test!

To see if I could tell how “shock resistant” the GearLight S1000 is, I gleefully gave it a few drops to the ground. This was done in a progression from soft to hard. All from waste height, I first dropped it onto soft carpeting. 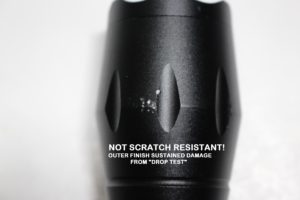 Scuff marks after being dropped

Then followed that with a drop onto a tiled kitchen floor. Last but not least, it came face to face with pavement! I actually did each surface, twice, trying to land it on its head a couple of times. Surprisingly, it survived ALL of them! The only damage was to the side of the head, where the black coating was scuffed off. I knew before the test that the coating is not hard anodized! 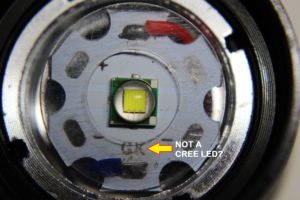 As I alluded to at the beginning of the review, you might think from the online sales presentation, that it’s a quality product. It’s also possible that the term “quality” can have different definitions depending on who’s doing the comparing. To me, “quality” means being waterproof, impact resistant, have a scratch resistant body and lens, along with voltage regulation, etc. These are the features I’ve come to expect. Therefore, the S1000 lacks quality, and presents the basic operation of a generic flashlight, which happens to be of the identical design of DOZENS of flashlights appearing in all sectors of the internet.

As with ALL budget lights, the spacing on the modes is very shallow, thus making them not significantly different from each other. From the indoor images above, you can see the difference in low and high, but when medium is added to the sequence, they seem less noticeable.

The lens is not high quality. It’s made from a hardened plastic material that will scratch easily. Like all other budget lights, it’s made with generic components which may or may not last depending on use. The company DOES offer a “limited one year warranty” which covers manufacturer defects, but not wear and tear or misuse.

It is my personal belief that budget flashlights are only good for general household use. Simply because they may not withstand the rigors of heavy outdoor activity. For camping and hiking, pulling the head forward and backward to try and see around you with any degree of constant brightness is a pain in the ass! The full (wide) beam setting is absolutely useless outside. Meanwhile when head is extended, the beam is bright, but you lose coverage from side to side. This CAN have advantages and disadvantages.

For security, activating strobe in a hurry, is an exercise in frustration. I shake my head in disbelief when I read reviews of similar lights, where the user has bought it for their college-bound daughter, to use for safety and self-defense. For a number of reasons… this type of light is BAD choice for that! For those situations, this is what I recommend.

So, if after everything I’ve said, you think the GearLight S1000 is the flashlight for you, then go ahead and visit their Amazon product page!