So, there have been many rave reviews on Amazon

They Love This Kit! 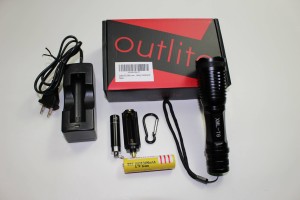 So I must admit, Outlite has adorned this package with everything that one would need in order to start themselves off with an LED flashlight.

They get the E6, a rechargeable 18650 battery, a charger, a plastic tube to hold the battery, a secondary cage (holder) for three AAA batteries (since it runs on those too) AND, as an added bonus, a small key chain flashlight that operates on three (included) button-size batteries.

The Flashlight and “Claimed” LED 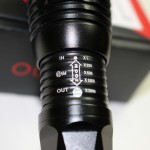 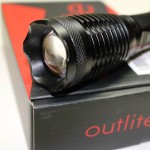 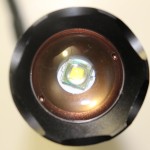 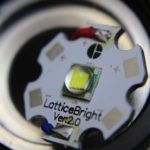 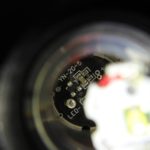 From the picture above, I hope you’ve realized that the LED inside the E6 is NOT a genuine CREE! It’s made by Lattice Bright. Here is the data sheet that shows the specs for this LED. Please note that its typical luminous-flux rating is 300 lumens!!! This is far and away LESS than the advertised 900 lumens that you’ll see online.

From the other picture above, I’ve also noted that there’s no heatsink between the LED (and star-base) and the driver chip below. What this omission indicates is that if the light is operated on high for an extended period, it will either shorten the life of the LED, or simply blow it out! This is due to the heat that the LED produces, which cannot be drawn away because there’s no heatsink!

It’s no small puppy. Because the head has a zoom function, it’s full length is 6.5″ Its length with the head retracted is 5.75″  The width at the widest point of the bezel, is almost 1.5″

The beam produced by the LED is slightly blue in tint, and very uniform when at its widest. With the head extended, the beam sharpens down to the “square” outline of the LED. The head has enough resistance so that it can be stationary in virtually any position between the spot, and the widest point. 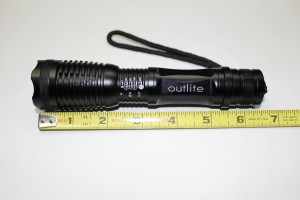 The E6 at FULL (extended) length

The images below demonstrate the “full” beam, the semi-full beam, and the squared spot. For the images in this section, I’ve tried to compare high mode to low mode, with identical shots. Click on each for a full size image. 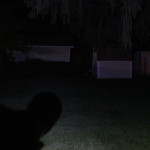 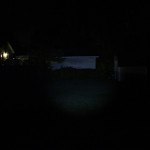 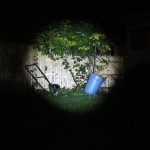 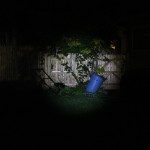 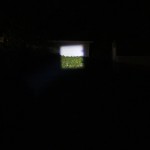 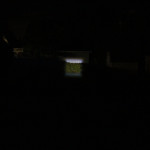 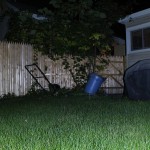 The E6 has three modes; low, medium, high. Plus strobe and SOS. You should be able to tell from the pictures, that there’s not a BIG difference between high and low. Medium, of course, is right in the middle.

One firm click of the tail cap turns the light on, and a “soft press” advances to the next level. There’s no memory, so once its off, it will be on high when switched on again.

At just slightly longer than my CooYoo Quantum SS key ring flashlight, this little “freebie” is okay for very up close illumination.

It has just one mode, activated by a small button on the end, and produces a distinctively “blue” beam. Three disposable button-size batteries are included. 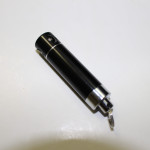 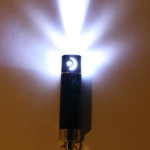 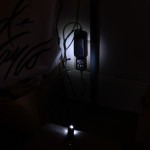 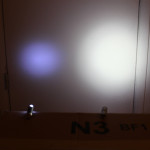 What can I say about this. It’s an Outlite 3.7 volt battery which claims 3600mAh. Under my exhaustive testing, I found it to be roughly 1930mAh. This low capacity means that under a high discharge it won’t have nearly as long a life as a better battery would.

Please refer to this article on fake battery capacities for more information.

Even more important, is that the battery claims to be circuit protected against over-discharge. Guess what… it’s NOT! In my testing, I was able to drop the voltage way down to 2.6! While in use in the E6, the output got dimmer and dimmer. A protected battery would normally not allow that to happen.

Here we go again. What can I say about a generic charger…which on its rear end, “claims” to be a “smart charger”!

When I placed the Outlite battery in the charging bay the bright red light came on. Good! However, with the battery being low capacity, it shouldn’t have taken more than 3 hours to charge it from a depleted state. Well, the battery sat charging and after 9 hours (with the charging indicator still red) I removed the battery for a voltage check. It was only at 3.8! The goal is 4.2, so this battery had a ways to go. I wasn’t about to wait for it since I could easily see it taking about 12 hours to reach full voltage.

Did I finish the charge? Yes. I placed it in my Opus BT-C3100 charger, at 1000mA current, and it completed the rest of the charge in 90 minutes. On the backside of the generic unit, it says “1A” output!! This is obviously a poor attempt at humor. I’d estimate due to the slowness of the unit that it can’t be using much more than 200mA at best. 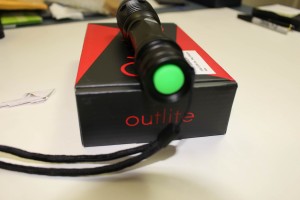 In conclusion, the Outlite E6 is fine as a secondary flashlight. I would NOT count on it as my MAIN flashlight.

It’s not waterproof, but it meant to be water resistant. One thing to know about “zooming” flashlights, is even if water gets on the sliding portion of the neck when the head is extended, it should be wiped off before pulling the head forward again. If water were to get pulled into the sliding mechanism, it could spell trouble if it reached the LED.

The sliding head works well and stops where you need it to. On full beam width the brightness is only useful at close range. Sliding the head forward is necessary when using outside, but even at mid-zoom, don’t count on useful brightness lighting up anything further than maybe 25 feet.

In my opinion, medium and low mode (at least outside) aren’t terribly helpful. Although low mode is probably no more than about 100 lumens dimmer than high, you’ll need all the output you can get to make the light useful. This is where a more powerful battery is essential!

I’m also going to take issue with the quality of the anodizing on this light. OBVIOUSLY it’s not TypeIII, as you will find on MOST “quality” lights. In the photo below, you can see what happened after I took the end of a pair of scissors to the body of the light and gave it a few “sweeps”. It has left permanent scratches! This will NOT happen on ANY flashlight that is TypeIII hard anodized. 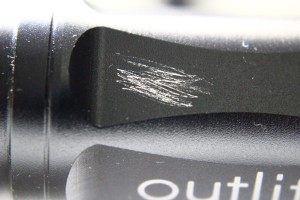 Scratches are the result of very poor anodizing!

One interesting observation. I compared using an 18650, to three rechargeable NiMH AAA cells. Remarkably, I saw NO difference in output. So as an alternative you can use three AAA’s, but I’d recommend NiMH’s (such as Eneloop’s) because you’ll use up alkaline AAA’s pretty quick. If you go this route, then you WILL need a smart charger anyway. Most, such as those I linked to above and below, charge both Lithium-ion and NiMH. Thinking about balking over the extra cost? Hey… you’re getting a really cheap flashlight here… you can afford to shell out the extra bucks for some decent accessories.

If you think the E6 is the right light for you, then I would suggest buying a reliable, (protected) correct capacity 18650 battery

. Also, unless you don’t mind waiting upwards of ten hours to charge that battery, then I’d suggest looking into a REAL “smart charger

Questions or comments? I’m here for you 🙂